For the third week in a row, the top-ranked Alabama Crimson Tide are huge favorites to remain undefeated as they take on Vanderbilt. But be careful betting on Bama as they are 1-2 against the spread and hit the road for the first time this year. Alabama beat Colorado State last weekend, but six ranked teams weren’t as fortunate in the weakest performance by the Top 25 this year.

BABB’s College Football Week 4 parlay pick — With those games behind us, we’re shooting for a two-game parlay this week (odds provided by betonline). Take Oklahoma (-27.5) over Baylor and Georgia Tech (-7.5) over Pittsburgh for a $25 parlay. If both teams cover the spread, the payoff is $68.18. If either team loses, the ticket is void.

Oklahoma (-27.5) at Baylor — There hasn’t been a better quarterback in college football this year than Baker Mayfield. He’s the best in the nation and now the favorite to win the Heisman Trophy.

The six-foot-one senior leads the Sooners into Waco this weekend riding a three-game winning streak. Obviously, if the No. 3 Sooners have their sights set on the national playoffs, a win here is a must. Here are Mayfield’s impressive stats in the three victories: He’s completed 63-of-82 passes (76.8%) for 1,046 yards, with 10 touchdowns and no interceptions. And, best of all, he is fearless in the pocket.

Oklahoma has crushed all three of its opponents this season, including a road win over highly ranked Ohio State. They have outscored the opposition by 106 points, so the 28-point spread doesn’t seem like that big a mountain to climb.

On the other side of the field, the Bears are winless in three games, including two at home. They are also 0-3 against the spread. This football program has been rocked by scandal in recent years, which has decimated the team. Head coach Matt Rhule, who took over the program this year, has a huge task ahead of him. 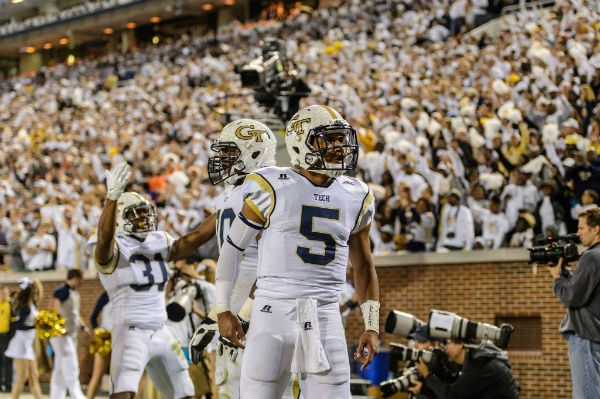 Can the Triple Option be Stopped?

The Panthers, 1-2 and 1-2 against the spread, head to Atlanta as a touchdown underdog against the Yellow Jackets, 1-1 and 2-0 ATS. Georgia Tech has had two weeks to prepare for this game, since their contest against Central Florida was cancelled last weekend.

As usual, the key to beating the Yellow Jackets will be shutting down the team's running game and the triple option. Considering the way the Pittsburgh defense has played the last two games, that will be easier said than done as Georgia Tech averages more than 370 yards a game on the ground — the best in the nation.

There is still some hope for the Panthers, though. Pitt beat Georgia Tech 37-34 at home last season, allowing 241 rushing yards. But can they score 37 points again when they don’t even know who will be their quarterback come Saturday?

TCU at Oklahoma State (-11.5) — Get ready for a shootout as No. 16 TCU travels to Stillwater to take on No. 6 Oklahoma State, which has averaged 54 points a game this season. Even at 70.5, the over/under betting line still doesn’t look high enough.