BABB’s College Football Week 3 parlay pick — Take USC (-15.5) over Texas and South Carolina (-7) over Kentucky for a $25 parlay. If both teams cover the spread, the payoff is $70.45. If either team loses, the ticket is void (odds provided by bovada.lv).

Texas at USC (-15.5) — Vince Young had the game of his life as Texas knocked off top-ranked USC 41-38 in the Rose Bowl to win the national championship. The year was 2006. This time, though, a victory for unranked Texas would be an enormous upset, considering they’re 1-1 and a 15.5-point underdog. It’s a game the Trojans will never forget, and one they will use to motivate their players when they square off against the Longhorns at L.A.'s Memorial Coliseum on Saturday.

Heisman candidate Sam Darnold leads the No. 6 Trojans into this Week 3 contest riding an 11-game win streak. He’s racked up a lot of passing yards in the first two victories of the season for USC, but there’s certainly room for improvement.

Darnold and the Trojans pulled away late against Western Michigan in the season opener with their QB passing for 289 yards and two interceptions. Darnold was much better against No. 12 Stanford last week, completing 21-of-26 passes for 316 yards with four TDs. But, again, he threw two interceptions. The talented QB must clean up this part of his game if the Trojans hope to make a run at the national title. Ronald Jones leads the team in rushing with 275 yards and five TDs.

The Longhorns got off to a slow start this season. Texas lost to Maryland in the opener 51-41, despite being favored by 19 points. They rebounded by gaining 623 yards in total offense in a 56-0 win over San Jose State. Now, they enter one of the toughest schedules in the country as the Longhorns meet five ranked opponents over the next seven weeks.

Both teams are 1-1 against the spread.

Kentucky at South Carolina (-7) — Both the Wildcats and Gamecocks come into this contest undefeated at 2-0, but that’s where the similarities end.

Kentucky got all they could handle in their season opener against Southern Miss and they had to rally from a double-digit deficit to beat Eastern Kentucky last weekend. QB Stephen Johnson has put up some decent numbers in two games, completing 26-of-42 passes for 400 yards and two TDs. Running back Benny Snell carries the bulk of the load. He’s gained 170 yards and one TD on 39 carries for the season. Now they head to Columbia for one of their biggest tests of the year.

This is the first home game of the season for the Gamecocks. They topped North Carolina State at a neutral site in their season opener and crushed Missouri on the road in Week 2. They were also the underdogs in both games. Now it’s time to earn a little respect.

For the second straight week, the Gamecocks won a game in which they were outgained from the line of scrimmage. But they were plus-three in turnovers and their defense was superb in the red zone. Kentucky has struggled against two weak opponents. This one could turn into a blowout with another subpar performance. The Wildcats are 0-2 ATS, while the Gamecocks are 2-0. 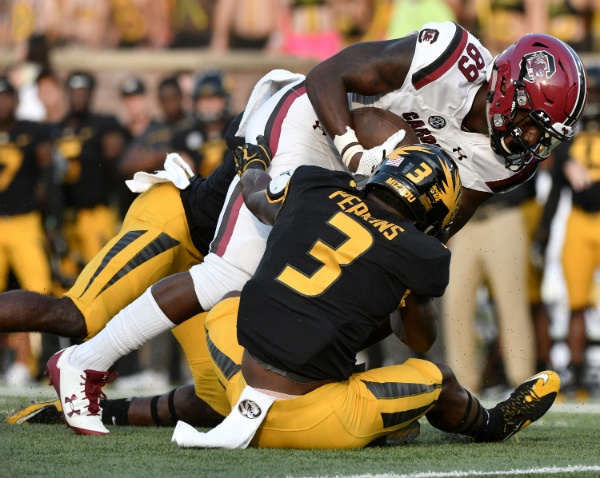 Take No. 3 Clemson (-3.5) to edge No. 14 Louisville. This is a great test for the Tigers defense, and one that will count a lot for playoff votes. Clemson has just two more games against ranked teams after this one. Also, keep an eye on games involving Florida teams. Hurricane Irma has disrupted most of the schedules involving those schools.