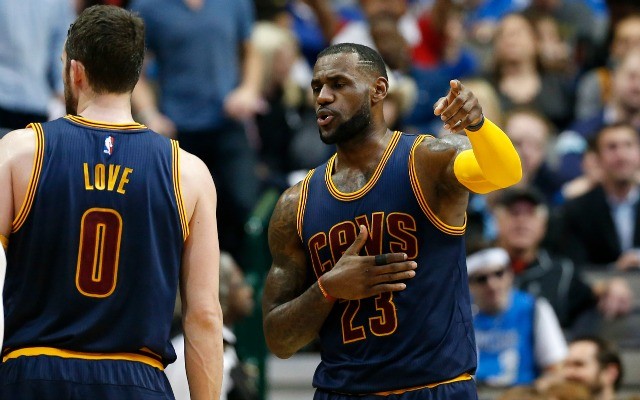 The Sweet 16 of the NBA playoffs tips off with four games on Saturday and four on Sunday to get things started and to no surprise, the Cleveland Cavaliers and Golden State Warriors are the favorites to meet in an exact Finals matchup at +160 at Sportsbook.ag.

Warriors Are No. 1 Overall Seed

Golden State had one of the great regular seasons in league history with 67 wins and an incredible 39-2 record at home, which ties for the second-best mark in league history. All the Warriors have to do to win a title is not lose at Oracle Arena again as they are the overall No. 1 seed. They  open the playoffs Saturday against No. 8  seed New Orleans. The Pelicans pulled off a surprise in their season finale on Wednesday, upsetting visiting San Antonio to end the Spurs' 11-game winning streak. That dropped the Spurs to the No. 6 seed in the West instead of No. 2.

The Warriors have the league's most efficient defense and No. 2 offense in efficiency. They have the expected league MVP in Steph Curry, Coach of the Year in Steve Kerr and Defensive Player of the Year in Draymond Green. The Warriors  three of four during the regular season vs. the Pelicans, splitting in New Orleans, while scoring 112, 128 and 112 points in the three victories. It should be noted that Pelicans star Anthony Davis played in just two of those games.

Golden State is the biggest opening-round series favorite at -5000. The Warriors are +220 to win the NBA title and -110 to win the West. San Antonio is next at +220 to win the West but now the Spurs have a tough opening series starting on the road Sunday at the No. 3 Clippers, who have won seven straight and 14 of their past 15 games. It's only the second time the Spurs have opened the playoffs on the road in the Tim Duncan Era.

The Cavaliers are No. 2 in the East behind Atlanta but heavy -240 favorites to win the conference and also +220 to win the NBA title. Cleveland should have little trouble in the first round against No. 7 Boston, which has to be the biggest surprise playoff team as even GM Danny Ainge expected a return to the draft lottery. Despite their underwhelming final record and the fact they were ranked No. 11 in the East as late as March 5, the Celtics stormed into the playoffs, winners of nine of their past 10 games and compiling the most wins in the conference since Feb. 1, finishing 24-12 in that span. Boston just beat Cleveland twice in the last week of the season but the Cavaliers didn't play anyone of note. The Cavs are -4000 series favorites. They are likely to face  No. 3 Chicago in the second round.

Top-seeded Atlanta opens Sunday against Brooklyn, a team the Hawks easily swept this season. Ironically, the Hawks also get to switch first-round picks with the Nets as final payment for the Joe Johnson trade. The Hawks open as -1200 series favorites. The Hawks would face either No. 4 Toronto or No. 5 Washington in the conference semifinals so they catch a huge break in avoiding the Cavs and/or Bulls until the East Finals. Atlanta is +400 to win the East with the Bulls at +600. Chicago should have little trouble in Round 1 against Milwaukee.

The FIFA World Cup in Qatar is finally upon us after years of anticipation and we're into the quarter-finals, with some huge soccer games set for the knockout rounds. The last eight teams in the tournament contain seven of the group winners, with some highly impressive individual and team performances in the last round standing […]

The UFC returns to Las Vegas, Nevada at the T-Mobile Arena this weekend for UFC 282 where the newly-vacated light heavyweight title will be on the line as Jan Blachowicz takes on Magomed Ankalaev in the main event. Originally set to be the co-main event for the card, now former champion Jiri Prochazka suffered an injury and was […]

The FIFA World Cup in Qatar is finally upon us after years of anticipation and we're into the last 16 stage, with some huge soccer games set for the knockout rounds. We will see the winners and runners-up of the eight groups so far in this competition go head-to-head in the first knockout round of […]

The boxing world unites once again as two legendary super-flyweight fighters go head-to-head when Juan Francisco Estrada takes on Roman "Chocolottito" Gonzalez in a huge trilogy bout. This time they'll be meeting with two titles on the line as The Ring and WBC super-flyweight belts are up for grabs in the Desert Diamond Arena in Arizona, having previously beaten each […]