Capitals Down to Last Lifeline

Penguins have Capitals on the ropes

The most disconcerting unraveling in the U.S. capital that doesn't involve President Donald Trump is unfolding at the Verizon Center. A loss in Game 5 to the Pittsburgh Penguins and the Washington Capitals will complete another playoff pratfall. Can they rise up and survive? We'll figure that out right here, based on odds provided by Bovada.lv: 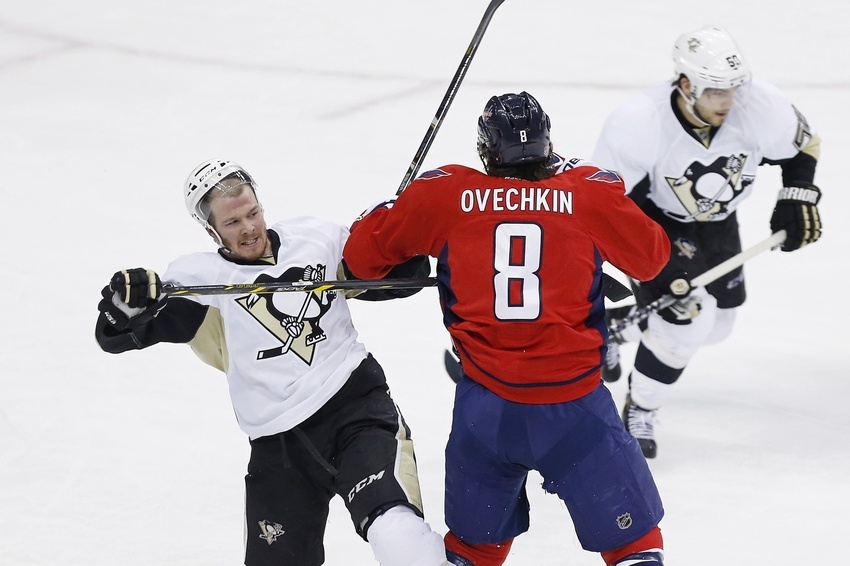 Even if they aren't showing it in the won-loss column, down 3-1 to Pittsburgh and facing elimination, the oddsmakers remain in the corner of the Capitals, at least for this game, putting them at -170 to win and survive to play another day.

Through four games, Washington is outshooting Pittsburgh 142-93 but the Penguins are outscoring the Capitals 14-9. Pittsburgh goalie Marc-Andre Fleury has parried 133 shots and owns a .936 save percentage in the series. At the other end, reigning Vezina Trophy winner Braden Holtby shows a dismal .867 save percentage.

Holtby isn't Washington's only concern, but when a team is losing the goaltending battle by that wide of a margin, it's of paramount concern. Another worry is Capitals captain Alex Ovechkin, who has gone three games without a goal. He's only scored once this series.

Jason Williams, generally a clutch playoff performer, hasn't scored in five games and has potted one goal in the last nine games. T.J. Oshie is goalless in five games and Marcus Johansson hasn't netted a marker in the past four games. Evgeny Kuznetsov, with three goals, and Nicklas Backstrom, with two, are the only Washington forwards to score more than once in the series. 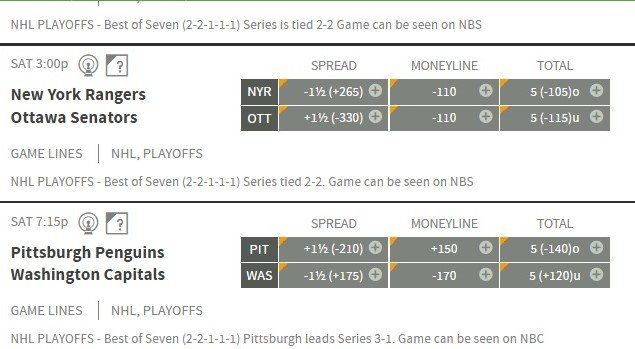 Then there's the issue of who Pittsburgh is playing without. Captain Sidney Crosby (concussion) missed Game 4. Crosby took regular line rushes at practice Friday but the Penguins would only say that he would play when ready. Kris Letang definitely won't play. Pittsburgh's best defenseman is out for the season with a back injury.

This series has proven a tough one on over/under wagering. Game 2 went over but the other three games all finished with exactly five goals, the total offered on this one. The Caps need to win to stay alive, so they will strive to keep things tight. Take the under at odds of +120. 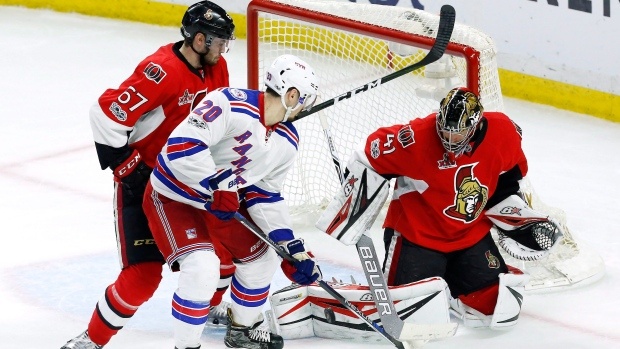 This one is so close to call that even Bovada doesn't want to call it, offering the same odds on both the Rangers and Senators. The home team has won all four games but the Rangers were clearly the more dominant team in Game 2 at the Canadian Tire Centre, causing some to jokingly suggest that the Rangers are leading the series 2-2.

Losers of successive 4-1 verdicts that were as lopsided as the score indicates, the Senators are reeling. Goalie Craig Anderson has been mediocre and Norris Trophy finalist Erik Karlsson, who is nursing two fractures in his foot, did not play in the third period of Game 4 but is said to good to go for Game 5.

The Rangers just got better as their first round series with Montreal continued and that formula is playing out again. So much so that the puckline wager of +265 on New York looks like a solid play even though you'll be required to give a goal and a half.