The Breeders' Cup Betting Challenge takes the form of a number of live and online qualifying tournaments. Winners of these feeder events earn a spot in the BCBC $1 million main event to be held during the Breeders' Cup World Championships on November 3rd and 4th, with the $10,000 entry fee paid, as well as consolation cash prizes. However, with only two weeks remaining to the Breeders' Cup, there are only four feeder tournaments left in which to qualify.

Of the remaining four feeder events, two are live events, and two others are what they call Pick and Pray events. Just as it sounds, live events take place as the selected races are ongoing. Just like in regular handicapping, players enter their selections just prior to each of the selected races.

In Pick and Pray events, all selections for all races must be entered prior to the first of the selected races being run. In other words, you are "locked in" to your picks for all races that are part of the event and can't change your selections after the day's event begins. In both cases, the Picks format is a very simple $2 Win/Place bet, with a payout cap of 20-1 on all Win bets, and 10-1 on all Place bets. At the end of the day's event, the player with the biggest bankroll wins. 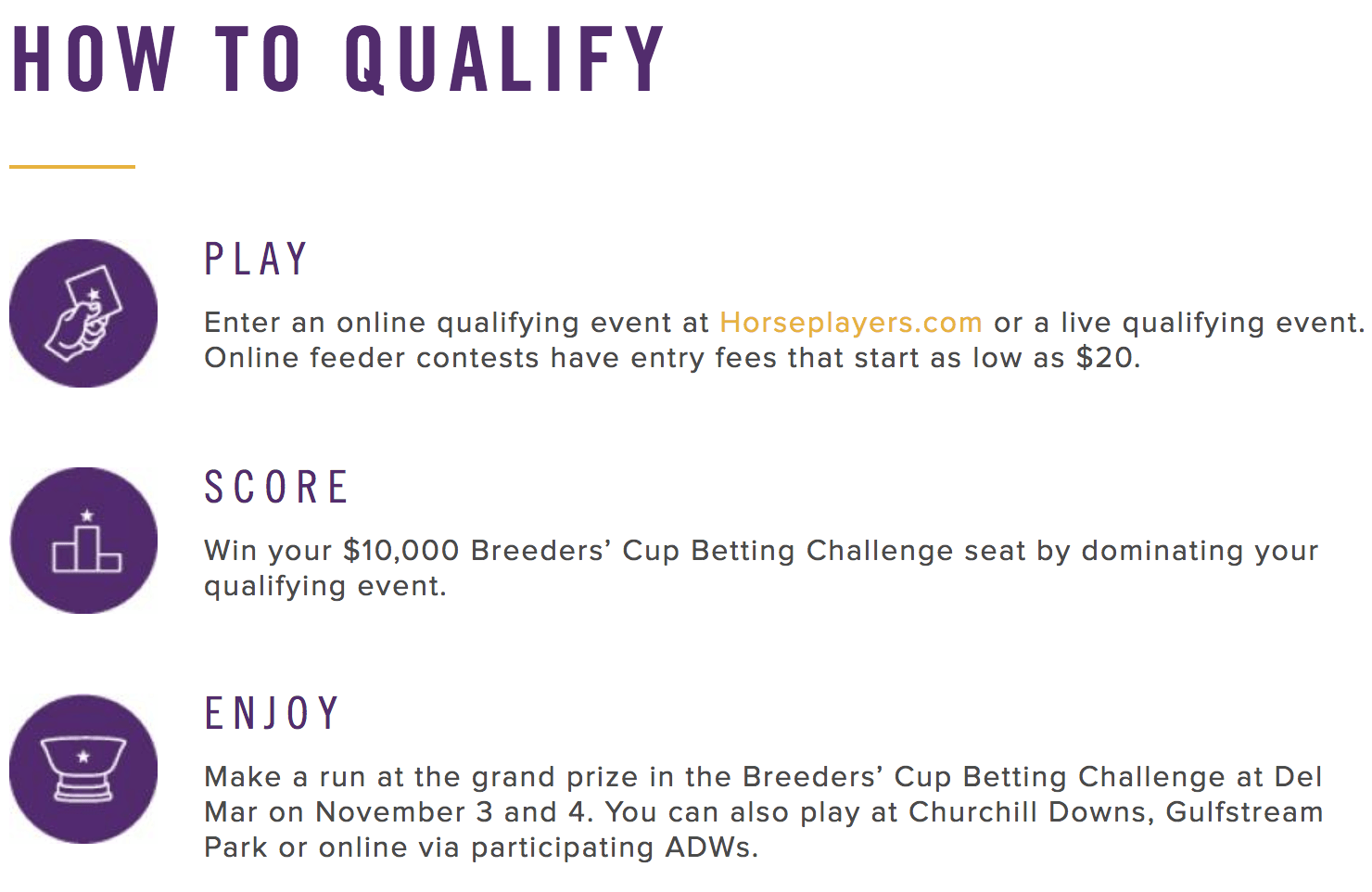 The two remaining Pick and Pray events for the BCBC are on Friday, October 27 and Sunday, October 29. Both of these events carry a $500 entry fee. The first of these is limited to 78 entries (although entry limits for all events could be expanded as per demand). There is a spot to be won for the BCBC main event for every 23 entries, with one gauranteed entry no matter how few people enter, nd three consolation prizes. In the second of these, there is also one main event prize to be won for every 23 entries, with one gauranteed spot and three consolation prizes.

The exact races to be bet and the closing time for all four events will be determined during this upcoming week. For more information on entering any of these tournaments, see the Breeders' Cup Betting Challenge website. And of course, you can bet the races any day of the week, including Breeders' Cup World Championships future bets, through an account with any quality racebook.

As the NFL celebrates its 100 anniversary, the league welcomes the Kansas City Chiefs back to the Super Bowl for the first time in 50 years. The Chiefs, 1.5-point favorites in Super Bowl 54, won Super Bowl 4 23-7 over the Minnesota Vikings as 12-point underdogs. Their opponents, the San Francisco 49ers have won five of six Super Bowl appearances but none since a 1995 victory in Super Bowl 29.

Over the years, the NHL All-Star Game has gone through many format changes but in the past few years, the league appears to have hit on a formula that works via its division vs division three-on-three tournament. Pitting the Atlantic, Metropolitan, Central and Pacific Divisions in a quick free-for-all, 20-minute mini-games has created an exciting tournament for fans and TV viewers, and a much better wagering environment for sports bettors.

It's been a half century since the Kansas City Chiefs won the Super Bowl. In fact, it's been 50 years since the Chiefs went to the Super Bowl. But Kansas City is favored to get there this year. The Chiefs go into the AFC Championship Game as 7.5-point favorites over the Tennessee Titans. Meanwhile, the San Francisco 49ers are seven-point favorites over the Green Bay Packers in the NFC Championship Game.

Read this article
Betting Picks - 17/01/20
Conor McGregor vs Donald Cerrone: The Notorious Returns To The Octagon

Conor McGregor is poised to make his return to the octagon and to UFC. The former lightweight world champion is slated to fight Donald Cerrone in a welterweight bout as part of UFC 246 on Jan. 18 in Las Vegas. The Irish fighter hasn't been in a bout since he lost via submission to UFC lightweight (155 pound) champion Khabib Nurmagomedov. Cerrone, normally a lightweight, lost his last two fights.