Both teams played a barn burner back on Nov. 3, with the Thunder edging the Clippers 85-83 in Los Angeles. In the see-saw battle, Russell Westbrook hit a go-ahead jumper with 18 ticks on the clock to pull out the victory.

His point guard counterpart, Chris Paul, ended just shy of a triple-double with 15 points, 11 rebounds, and nine assists. However, Paul committed three of his five turnovers in the final quarter. Both point guards, two of the NBA's best, will meet in the rubber match, this time in Oklahoma City.

The loss was Los Angeles (7-1) only hiccup of the season, as the Clip Show appear to be legit championship contenders so far. They are off to the best start in franchise history, and all but one of the Clippers' seven wins have been by double digits.

It's been the defense that Los Angeles has relied on to pace their historic start. The Clippers lead the league in scoring defense, surrendering just 88 points per contest.

Oklahoma City (6-2) are coming off a ten-point defeat at home to Toronto on Wednesday. The loss featured the Thunder being a little to trigger-happy at the three point line, shooting 12-of-34 from three-point land.

Expect another defensive battle on Thursday. The result may be different this time around, but the Thunder will cover the five-point spread. 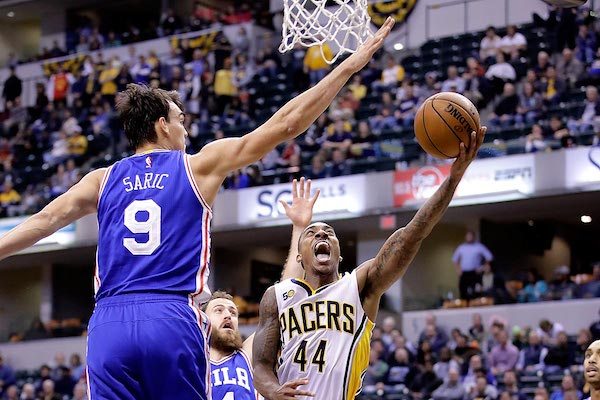 The Pacers (4-4) and 76ers (0-7) know each other very well, having just met on Wednesday in Indiana. If not for heroics from Paul George, Philadelphia might have pulled out their first victory of the regular season. The 76ers blew a six-point advantage with under two minutes left in regulation. In overtime, George took over, scoring seven of the team's 13 points to hand the lowly Sixers a 122-115 loss.

However, that defeat was without Joel Embiid, who stayed at home to rest. With the big man in the lineup, it could be a different story on Friday.

Turnovers could be key in the rematch. Miscues are the norm with Philadelphia, evidence by their 35 turnovers the past two games. However, Indiana suffered from the same fate on Wednesday. The 76ers capitalized for 24 points off 15 Pacer giveaways.

Not only are the Sixers the last Eastern Conference team not in the win column, they haven't won a game in November since 2013 — that's not a typo. Matter of fact, Philadelphia has dropped 44 consecutive games in October and November.

All streaks have to come to an end at some point, and with Embiid back, the 76ers finally end the hold-your-nose bad streak on their home floor.

Don't look now, but the Knicks offense is starting to gel. After an uneasy start, New York has topped at least 109 points in each of the past three games. The Knicks pulled out victories in two of those contests to improve to 3-4.

We know New York's starters can score from all angles, courtesy of firepower from Carmelo Anthony, Kristaps Porzingis, and Derrick Rose. However, their bench flashed in their latest win over the Nets.

A second-unit lineup featuring Willy Hernangomez, Sasha Vujacic, and Mindaugas Kuzminskas (tough last names from the trio, I know) saved the Knicks from a near-loss to Brooklyn as the three opened a lead late in the game.

New York's offensive prowess, they're now averaging 103 points per game, has been offset by their defensive woes. Head coach Jeff Hornacek has been shuffling lineups to no avail as the Knicks are being gashed for 107 points a game — 23rd in the NBA.

They'll have their hands full on the road against the Raptors (5-2), a team dotted with ball handlers. While it's early, DeMar DeRozan is the scoring champion during the young season. At 34.1 points per game, the guard is averaging an entire three more points than second-place Westbrook.

Expect the scoreboard to light up all night in this one, so hit the over.