Pens Have Too Much For Sens

They've already taken out two of the top four teams in the NHL, including the President's Trophy-winning Washington Capitals for the second successive spring. The Pittsburgh Penguins look to be on a mission to defend their Stanley Cup title and are the Ottawa Senators really anything more than a speed bump along that journey? Let's examine the possibilities, utilizing odds provided by BetOnline.ag:

Let's be up front about this from the get go - the Penguins simply have too much for the Senators to overcome. On paper, this one is a mismatch.

There are four Penguins among the top 10 in Stanley Cup scoring, and they come from all demographic areas of their roster. Evgeni Malkin, second banana to captain Sidney Crosby but a player with equal appeal as a point producer, leads the playoff scoring race with 5-13-18 numbers. With so much checking duty assigned to slowing Sid, it often frees up Malkin to be a devstasting force.

Crosby is right there in fifth spot with 4-10-14 totals and Phil Kessel, often a third-line player, rolls along with consistency, seventh in scoring at 5-8-13. Then there's Jake Guentzel (9-5-14), a rookie for crying out loud, who leads the Stanley Cup in goal scoring. And we haven't even mentioned sophomore Bryan Rust, Mr. Clutch, whose first three postseason game-winning goals have all been series deciders, including both sets so far this spring.

So where can the Senators draw hope that they are in with a chance? Well, start with defenseman Karlsson, who can be absolutely dominant in his ability to take the game over at both ends of the ice. Ottawa has plenty of guys who can put the puck in the net but they will need to be more consistently productive to hold any chance of keeping pace with the Penguins. Passengers like Bobby Ryan (no goals in six games) and Derick Brassard (one goal in nine games) need to get on the board and contribute.

There's always the chance that Pittsburgh goalie Marc-Andre Fleury suddenly reverts to the Fleury of playoffs recent and not the guy who has posted an Eastern Conference-leading .927 save percentage this spring. The trouble with that theory is Senators netminder Craig Anderson's save percentage is a pedestrian .914 and he's faced 53 fewer shots than Fleury. 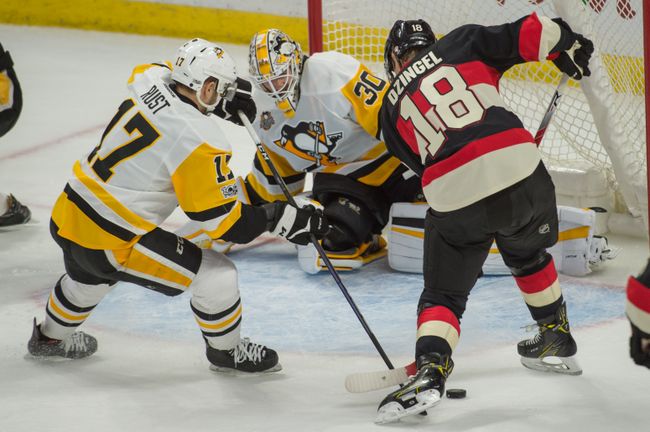 Goals are generally scarce where the playoffs are involved but not with these two teams. Five of the last eight games between the Senators and Penguins have gone over, and both of these teams have been involved in playoff score fests that exceeded the total of 5.5, the total set for Game 1.

The Penguins have topped that number in six of 12 games, while the total went over 5.5 in five of the Senators' 12 games.

The over looks to be the consistent play in this series.

At BetOnline, you aren't restricted to picking which team will win this series. You may also wager on how long it will take them to get the job done through their Series Exact Outcome prop play.

If you are a Penguins backer and like them to take care of business quickly, a wager on Penguins in four games will return at odds of +500. If you fancy a Senators sweep, that pays at whopping odds of +3300.

If you are of the opinion that things will take much longer to be decided, wager the Penguins in seven and get odds of +450. Or bet the Sens in seven at +800.