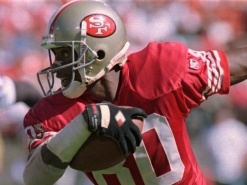 Great NFL receivers come in all shapes, sizes and styles. Some are deep threats capable of leaving a defensive back in their dust. Others are slippery as an eel, causing defenders to grasp at air as they zig when they were expected to zag. Then there are the possession receivers, guys with hands like glue who always make the catch and never come up short of the first down. When the game is on the line, these guys who come through in the clutch and make that big play happen.

Best NFL receivers of all time

The NFL race is getting down to the nitty gritty of the regular season and before you know it, the playoffs and the Super Bowl will be upon us. That’s the time of year when many of these great receivers did their best work, leading their teams to postseason glory. You’ll want to watch this January as a new crop of pass catchers seeks to gain fame and earn a place up there with the legends of the game.

Who is going to be the next top NFL receiver to move among the all-time greats? Antonio Brown? Julio Jones? Jason Witten? You’ll want to pay attention to this season’s playoffs for that answer and while you’re doing, put down a few wagers and win at the same time.