The Michigan Wolverines are the highest ranked team of the four participants in this weekend’s event. The No. 11 Wolverines face the No. 17 Florida Gators in the AdvoCare Classic Kickoff on Saturday afternoon in Dallas, while the No. 13 LSU Tigers meet the unranked BYU Cougars in the AdvoCare Texas Kickoff in the nightcap in New Orleans. The game was moved from Houston.

All four teams have bowl aspirations this season. Let’s take a look at how they match up for Saturday’s games (odds provided by betonline.com).

Jim Harbaugh wins wherever he goes. The Michigan head coach, entering his third season, is 20-6 with his alma mater. They were 5-7 the season before Harbaugh left the NFL for Ann Arbor, Mich. So, opponents can expect a tough assignment when Harbaugh and the Wolverines come calling.

Michigan has just five starters returning this year — four on offense and one on defense. But another great recruiting year has the Wolverines threatening Ohio State, Wisconsin and Penn State for another Big Ten title. Wilton Speight is the frontrunner for the quarterback job. He completed 204-of-331 passes for 2,538 yards last year with 18 touchdowns and seven interceptions.

Like Michigan, Florida is another powerhouse program in the nation. The Gators finished 9-4 last season and crushed the Iowa Hawkeyes 30-3 in the Outback Bowl. But they scored just 311 points last year, averaging just 23.9 points per game, one of the lowest outputs in college football.

Suspensions have been the story of the preseason for Florida as they’ve lost star receiver Antonio Callaway and running back Jordan Scarlett. Turmoil is not good for any team, especially one that is starting a redshirt freshman in Feleipe Franks at quarterback. Michigan is a huge test for the new QB this early in the season. And, if that wasn’t enough, the Gators must still face Tennessee, LSU, Georgia and Florida State.

BABB’s picks — Michigan might be more talented across the board than it was last year. But Harbaugh is the difference maker. He will have his young group ready for the opener. Take the Michigan Wolverines and give up the points. Both inexperienced offenses might struggle a bit, so take the under 43.5 points.

Huge opportunity for BYU. Win this one, and they immediately enter into the national spotlight. Unfortunately for the Cougars, they didn’t look ready for prime time last weekend when they struggled to a 20-6 victory over Portland State. LSU is a major contender in the SEC and a top team in the nation. BYU must make huge improvements over last weekend, or this could be a blowout.

LSU comes into the opener off a fine season last year.

They finished 8-4 and crushed Louisville 29-9 in the Citrus Bowl. But they made some moves at the top and brought in new head coach Ed Orgeron and offensive co-ordinator Matt Canada. Look for the new regime to spread the ball around and use all of their weapons, which start with quarterback Danny Etling and running back Derrius Guice.

Tanner Mangum completed 16-of-27 passes for 194 yards and a touchdown, and Squally Canada had 13 carries for a career-high 90 yards and a score to help BYU in their first win. Portland State's offense crossed midfield just twice, so the Cougars defense was at the top of their game. The stakes are much higher now.

BABB’s picks — This game comes down to the effectiveness of Etling and the LSU offense. If LSU can move the ball in the air, BYU is in for a long day. Take the Tigers and give up the points. Both teams have strong defenses so the final score shouldn’t get too far out of hand. Play the under. 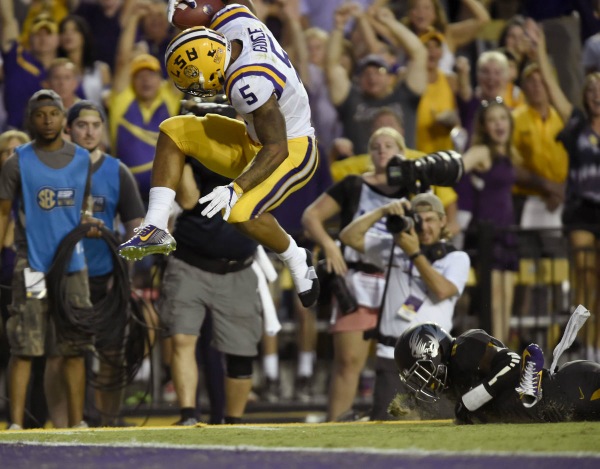