Quarterbacks are paid tens of millions of dollars in the NFL to win games, not throw interceptions. Obviously, some are better at it than others. But franchises still have to pay up for these players because there’s no more important position in the league than the player behind center.

Case in point is Jay Cutler. The former Bears QB retired last season after a mediocre 11-year career. He threw for 208 TDs, but he also had 146 interceptions. That’s not a good ratio in this league and those numbers will leave even the best passers wide open to criticism.

The Miami Dolphins, desperate for a quarterback after a season-ending injury to Ryan Tannehill, lured Cutler out of retirement and signed him to a $10-million, one-year deal including incentives. That’s a lot of money for a quarterback with a 68-71 career record.

Could Cutler lead the league this year in interceptions?

Let’s take a look at the contenders (odds provided by bovada.lv).

The Jaguars signal caller is the favorite to lead this category. He didn’t help his case at all when he threw five interceptions in a recent team practise during training camp.

This is Blake Bortles’ fourth year in the league.

He finished fourth in 2016 with 16 interceptions, he led the league in 2015 with 18 picks, and he placed third in his rookie season in 2014 with 17 interceptions. The third overall pick in the 2014 draft is making a name for himself, but for all the wrong reasons.

Jacksonville is 11-37 in the three seasons Bortles has been the starting QB. The team has not had a winning record since 2007. If Bortles can’t improve on his interception rate, the Jags are in for another dismal season. 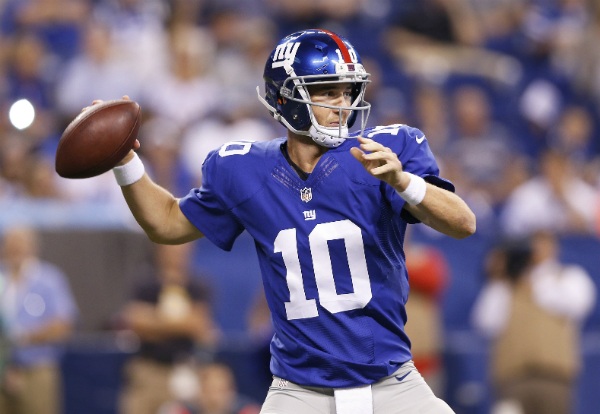 He also averages almost 17 interceptions a year, which is among the league leaders. He led this category in 2013 with 27 picks.

The Giants have one of the best receivers in the game in Odell Beckham. They added Brandon Marshall to their receiving corp in the offseason, which will give Manning another great option to go to in the air. But it could also be another opportunity for opposing defenses to pick him off.

The Chargers QB had his worst year for interceptions last season when he was picked off 21 times and led the league in this category. Rivers throws for a lot of touchdowns as well, but that is not what this bet is all about. The 14-year veteran averages about 14 interceptions a season.

That number won’t get him near the leaders this year. The Chargers, who were 9-23 the last two seasons, move from San Diego to Los Angeles. The entire team must improve, not just Rivers.

Winston, the first overall pick of the 2015 draft, now enters his third year with the Buccaneers. All of his quarterback numbers are going up — QB rating, touchdown passes, passing yards and … interceptions. Winston finished fifth in this category as a rookie with 15 picks.

He was second last season with 18. As he matures as a quarterback, hopefully these numbers will improve. Tampa Bay was 6-10 in their first year with Winston behind center. They climbed to 9-7 last year. The NFC South club looks to make the playoffs in 2017.

BABB's Pick — It’s tough to bet against the favorite. Bortles does not seem to be making a successful transition from college to the pros.