Underdogs With The Best Chance At The Run For The Roses

Anything can happen in the most exciting two minutes in sports and the historical race is one that is ripe for an upset. Though the race has historically been kind to favorites, the Run for the Roses has also seen a fair share of longshots pull off a shocker.  Picking a longshot that wins not only offers a potential big payday but gives you bragging rights for the rest of the year.

This year, while there are some very talented three-year-olds, there is no major star. Even the favorites are beatable. This could be the sort of year to take a swing and pick a longshot.

While the field is not set yet and a lot can change in the days leading up to the Kentucky Derby, here are some potential longshots heading to Louisville that could be worth a look. 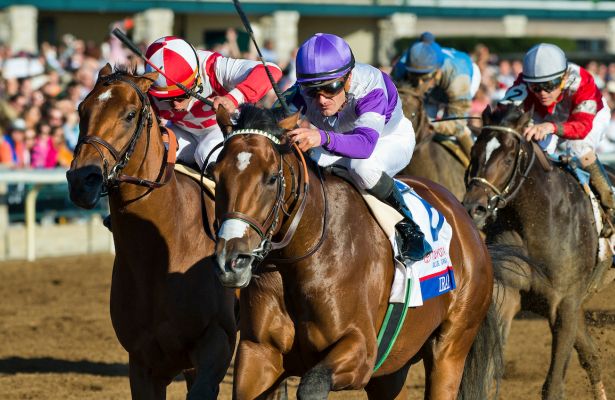 Irap lit up the toteboard at odds of 31-1 to stamp his ticket to the Kentucky Derby with a victory in the Blue Grass Stakes (G2). The reason for his lofty price? He was a maiden which means he had never actually won a race before. After seven attempts, including a couple of good efforts against graded stakes competition, he broke through in style. There may be reason to think this colt is not a one-hit wonder. The connections of Doug O’Neill, Paul Reddam and potentially Mario Gutierrez may sound familiar – they have teamed up to win two editions of the Kentucky Derby already with I’ll Have Another (2012) and Nyquist (2016).

This colt also has a very strong pedigree. He is from the female family of champion and elite sire Speightstown and his sire is Tiznow known for passing on his stamina and toughness to his offspring.

International horses do not have a strong track record in the Kentucky Derby but this colt could be the one to change that. He is a homebred for the world-class powerhouse Godolphin, and while they have won pretty much every horse race in the world, the Kentucky Derby has eluded them.

This colt began his career on turf and proved himself to be a top level competitor with a Group 1 win at France. He moved up significantly when he switched to dirt at Meydan and won the UAE Derby (G3). Though he did not win by a gaudy margin and had to fight out the win to prevail by a nose, he showed a lot of tenacity that will serve him well in the Kentucky Derby. Additionally, he is one of the only horses who has competed in a field nearly as large as he will face on the first Saturday in May.

Battle of Midway has quite a few things against him – he lacks experience, he has never won a graded stakes race and his runner-up effort in the Santa Anita Derby (G1) did not blow people away from a time standpoint.

However, he has all the makings of a horse who could pick up the pieces and get on the board at a big price.He is a physically strapping, mature-looking colt and his pedigree suggests he will continue to improve as he gets older and the distances get longer. He dug in and really fought back after contesting the pace last time out and has proven to be a versatile runner.

Gunnevera should get some recognition as being one of the most consistent horses in this year’s crop of sophomores.

His effort last time out in the Florida Derby (G1) is better in context than it appears on paper. He broke from the outside post at Gulfstream Park, a notorious hindrance for Gunnevera, and jockey Javier Castellano was forced to take a sharp left turn out of the gate to secure a more advantageous spot on the rail. From there, he tried to close on a speed-favoring track. The best he could manage was third, but it could have been much worse.

He has proven on multiple occasions that he can overcome adversity and still run his race, making him an appealing Derby pick. Is his race good enough to win? That remains to be seen.

On one hand Sonneteer has no business being in the Kentucky Derby. He is a ten-start maiden and at this point has had every opportunity to get the job done. He is interesting, though, in that he is such a deep closer and in the event of a total pace collapse, he could be flying late and get a piece of the action at a massive price.

His effort last time out in the Arkansas Derby was competitive – he was fourth and looked like, had the race been a little bit longer, he could have been in the mix for second or third. Legendary breeding and racing operation Calumet Farms will be well-represented this year by potentially Hence, Patch and this colt so it could make for an interesting race.