All roads to the most valuable player title go through Los Angeles and their superstar outfielder Mike Trout. He has owned this trophy, winning two of the last three seasons. In 2015 when he lost, he finished second in voting behind Toronto third baseman Josh Donaldson.

It will take a very special season to dethrone Trout. Let’s take a look at the favorites for the AL MVP title (odds provided by betonline.ag).

Aaron Judge, New York (-170) — In 27 games last season, Judge struck out in more than 44 per cent of his plate appearances while hitting just .179. What a difference a year makes. Now the everyday No. 3 hitter for the Yankees, Judge still has a high strikeout total at 36 per cent, but he’s hitting .312 with 30 homers. This is the stuff legends are made of, especially in the Bronx. Before everyone says “case closed” and just hands the MVP crown to Judge, the outfielder is hitting .175 with one home run in the last two weeks as baseball races to the regular season finish line. The awards are not given out in July. Judge has a lot of work to do yet.

Jose Altuve, Houston (+200) — The Astros are 10 games ahead of every team in the American League right now. What’s even more amazing is the fact the club is 33-11 on the road. The top of their lineup is superb, led by George Springer, Altuve and Carlos Correa. With Correa out of the lineup with a lengthy injury, there’s even more pressure on the top two hitters. Altuve, hitting .353, continues to deliver year after year. He’s a career .315 hitter, who can also hit home runs and steal bases. The all-star infielder hopes to lead Houston to the World Series. The last time the club made it there was in 2005 when they were swept by the Chicago White Sox. 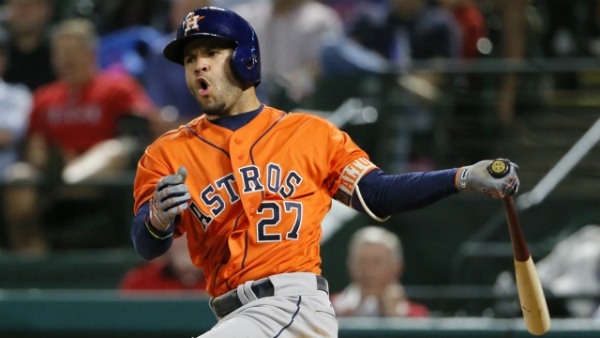 George Springer, Houston (+600) — Here’s another slugger that doesn’t garner enough attention in Houston. The Astros’ leadoff hitter is just one of the many stars on this club. Springer can hit for average and power, which is a bit unusual for a leadoff hitter. The 27-year-old is hitting .307 with 27 homers, and he seems to get better every year. He’s on pace to break his personal marks for average, home runs and RBIs. Springer homered four times in the team's first seven games, becoming the first player in major league history to hit three leadoff home runs in the first seven games of a season.

Mike Trout, Los Angeles (+1200) — Trout can do it all. He hits for average, home runs and, if called upon, he can steal bases, too. For the first time in his career, Trout was forced onto the disabled list in May after tearing a ligament in his left thumb. He missed six weeks of action. In 52 games this season, the Angels outfielder is hitting .335 with 18 home runs and 11 stolen bases. Those are MVP numbers. But with the time lost to surgery, will a shortened season be enough to sway the voters? He will need a miraculous finish to the season to capture his third title.

Mookie Betts, Boston (+1400) — The Red Sox sensation is hitting .277 with 17 home runs and 17 stolen bases. And, by all accounts, this is an off year for Betts, considering his numbers were much better in his first three seasons in the league. He finished 2016 with a .319 average and 31 home runs, good for second in MVP voting. “He’s come up big in so many situations,” manager John Farrell told boston.com of his young star earlier this season. The Red Sox will need Betts at his best to make a run at the playoffs.

Judge’s numbers, in his rookie season, just might continue to tail off. Altuve has been here before. His numbers prove it.

Aaron Judge is dominating headlines in just his rookie season. The six-foot-seven all-star was hitting bombs over 500 feet in the Home Run Derby, which he won easily. Now, oddsmakers are comparing his home run totals against Roger Maris and Barry Bonds (odds provided by topbet.eu). 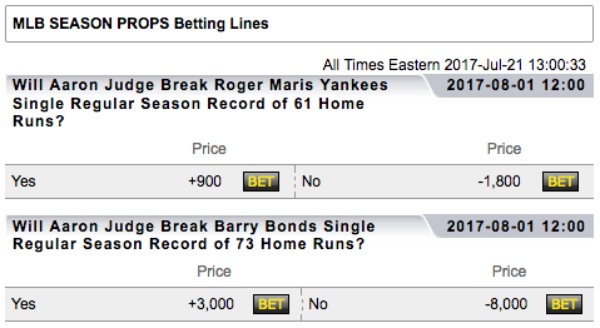 Prediction — Judge will continue to wow the crowds in New York, but Maris’ mark of 61 home runs is too much to ask of the young star, and Bonds’ record of 73 blasts is out of the question.