This is old hat for Boise State. The Broncos come to a bowl game to face a team from one of the power five conferences listed as the underdog, seeking an upset. In the Las Vegas Bowl, they will look to add the Oregon Ducks to their impressive list of bowl game victims, a group that already includes the Oklahoma Sooners, TCU Horned Frogs and Washington Huskies. 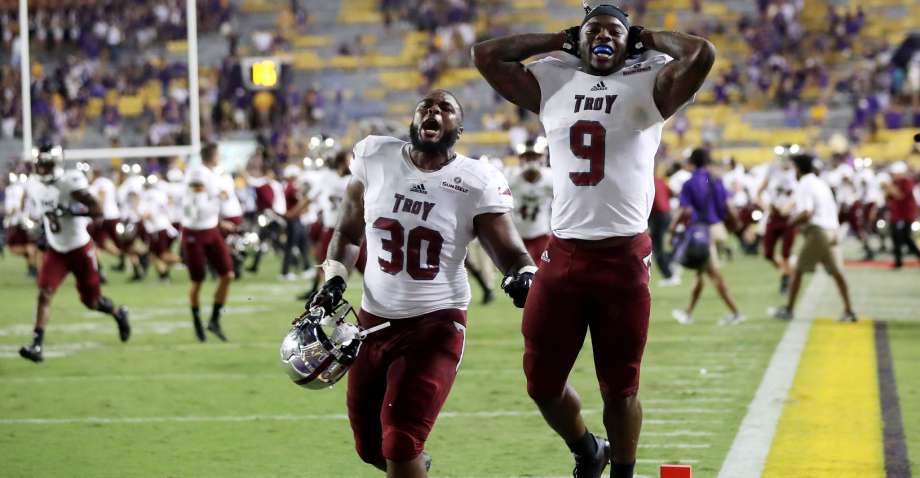 The Troy Trojans don't have the rich history of David slaying Goliath triumphs that Boise State has assembled, but they certainly put an impressive trophy in their case this season, traveling to Baton Rouge and toppling traditional SEC powerhouse LSU right in Tiger Stadium. They will look to bring more of that magic formula into the R+L Carriers New Orleans Bowl as they face North Texas.

Here are all of the picks for Saturday's bowl games straight up and against the spread. The underlined teams, with their money line odds, are the straight up picks, based on odds provided by Bovada.

North Texas (+230) vs. Troy (-270) - When quarterback Brandon Silvers led the 10-2 Trojans to their 24-21 upset of LSU, it ended a 49-game home non-conference winning streak for the Tigers. Troy comes to the New Orleans Bowl for the first time since 2010 on a six-game winning run and as co-champions of the Sun Belt Conference. The high-scoring offense of the 9-4 Mean Green set school records for points (467), total yards (6,071) and passing touchdowns (29). But they are 2-8 against Troy.

Georgia State (+200) vs. Western Kentucky (-240) - The 6-6 Western Kentucky Hilltoppers are in a bowl game for the fourth straight season and have won three bowl games in a row. But they come into this game with four losses in their last five games. Western Kentucky's run game ranked 129th in the nation (2.14 yards per carry), explaining why QB Mike White was second in the country with 521 pass attempts. The 6-5 Panthers scored just 20 points per game, ranking 118th in the FBS.

Boise State (+240) vs. Oregon (-290) - It's been a topsy-turvy season for the Ducks, filled with injuries and the departure of coach Willie Taggert to Florida State. Oregon finished the regular season 3-1 and coach Mario Cristobal had the interim tag removed. The key could be Ducks QB Jason Hebert. When he was healthy, Oregon went 6-1. The Ducks were 1-4 without him. With Hebert in charge, they should outscore the Broncos in a close, high-scoring affair, even minus RB Royce Freeman, who was eighth in NCAA rushing.

Marshall (+190) vs. Colorado State (-230) - Marshall raced to a 6-1 start to the season, but the Thundering Herd has won just one game since. Likewise, Colorado State launched 6-2, but the Rams enter this game 1-3 in their last four. Marshall, which lost all of its conference games by 11 points or less, is 4-0 in bowl games under head coach Doc Holliday. The Rams offense topped the Mountain West Conference, averaging 33.8 points a game and 6.7 yards per play.

Middle Tennessee State (+155) vs. Arkansas State (-175) - Middle Tennessee State did something that No. 1-ranked Clemson couldn't - the Blue Raiders opened the season with a win over Syracuse. They were 4-2 when QB Brent Stockstill was hurt, and 2-4 without him. Both Blue Raiders starting running backs, Tavares Thomas and Brad Anderson, are questionable for the game. Arkansas State finished 15th in the nation, putting up 38.5 points per game, and sixth in passing yardage (3,748).