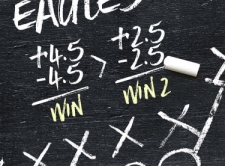 Malcolm was in the middle. Jan Brady lamented a life lived as the middle child of the family. Middle America is given much of the credit/blame for electing Donald Trump as the 45th President of the United States. But we're here to tell you that being in the middle isn't all bad. Take Oreo cookies, for instance. Or Tootsie Rolls. People desire and work toward those middles with delight and glee in their hearts. Then there is betting the middle on a sports event, and believe us when we say it doesn't get any tastier than that.

In The Middle Of It All

And if you choose not to believe us, then read on and we will explain to you why betting on the middle isn't just a fair to middling experience. It is downright fantastic.

What It Means To Bet The Middle

Betting the middle, or middling, as it is often called by bettors, is like a dream sequence from a movie, almost too good to be true. It's like Justin Verlander winning the World Series and also getting to marry Kate Upton. Yes, it is absolutely that splendid. It is the true definition of having your cake and eating it, too. It is the Joni Mitchell of sports wagering, because not only are you betting both sides now, you are winning on both sides now.

What is the middle, you ask? Allow us to explain. Betting the middle is finding that rare and spectacular opportunity to bet and win on both sides of a point spread wager, utilizing different lines. Wait - is that really possible? Why, not only is it possible, it occasionally even happens.

Suppose the Seattle Seahawks and Los Angeles Rams are playing a Thursday night NFL game. The opening line has the Rams as three-point favorites at home. You think that makes sense, so you place a $100 wager on the Rams to cover and win. As it turns out, the general public also likes the way you think, and money is being pounding on the Rams at the sportsbook.

By game day, the Rams have grown to seven-point favorites, and suddenly, you are thinking L.A. is a good team, but the Rams aren't seven points better than the Seahawks. You get online and go back to your sportsbook. This time, you bet on the Seahawks and take the points on another $100 wager. This is considered to be a dream scenario for bettors, and we are going to tell you why right now.

Being In The Middle Is Awesome

The game gets underway and you are holding two tickets counting on two outcomes that both involve a Rams victory. You want a Los Angeles triumph by more than three points, but less than seven points. In other words, let's say the final score ends up Los Angeles 24 Seattle 20. The Rams have covered on your first $100 bet of Los Angeles and minus-three points. And you also get to cash on your second $100 bet on the Seahawks at plus-seven points. Now do you see what's so wonderful about being in the middle of things?

When middling bets, the wider the discrepancy between the original line and the new line, the better the odds that you will cash and cash in again. And in reality, you should only middle your bets in this scenario, because while it's true that you can double your winnings, you can also quickly double your losing. Do that with frequency and you will soon bid adieu to your bankroll. So while middling can be a great way to cash in big time, it's also like that cake we mentioned earlier. If you have cake every day, your health will take a hit.

Middling is definitely something to watch for, but like we said, it's a very rare occurrence that the situation will unfold like the one we outlined above. An astute bettor will look for those perfect storms and seek to capitalize when it happens, but to try to and find a middle bet on a regular basis would be like betting that a safety will be the first score on an NFL game on a regular basis. Do it on occasion, but don't make a habit of it.

There is a real debate within the sports betting industry as to the status and stature of the middle bet. Some purists see it as almost being immoral to wager on both sides of an outcome, viewing it almost as distasteful as a philanderer inviting his wife and mistress out to dinner together.

Know this - some may view it as unethical, but betting on the middle is not illegal and will not get you into any kind of trouble with your sportsbook. In fact, most sportsbooks don't mind you betting the middle one bit. There will be no backlash or concern on their end, because they are well aware of the difficulty involved with successfuly hitting both wagers on a middle bet.

You just might have to deal with the dirty looks of old-school bettors who believe gambling is all about choosing one side or the other. Then again, hipster bettors will treat you with an aura of awestruck respect when you hit on a middle bet and offer you sufficient kudos for finding a method of having it both ways.

There is no middle ground when it comes to betting the middle. The middle bet is a simple one to play, but a difficult wager to win. In the last two decades, close to 20 percent of all NFL games ended with a three-point margin on the scoreboard, while another 16 percent were decided by a final margin of seven points. These are the two lines offered in the scenario we explained to you from the hypothetical Seahawks-Rams game, so if you are able to find a swing of that extent in the line, that's an ideal time to middle your bet.

At the same time, it is a strategy you should deploy judisciously. Wagering is about going all in. If you hedge your bets too often, all you will do is lose and lose again.