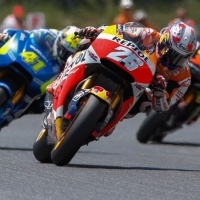 MotoGP is one of the most exciting motorsports in the world, one that is often referred to as the Formula 1 of motorcycling.

Below you have the list of the top pilots and their respective odds to become the world champion. Soon, the constructors champion odds will also be available.

If you already know in which rider you want to bet, click on Bodog, which has the best odds for the MotoGP futures.

If you are not a big fan of MotoGP, just bare this in mind: Marc Marquez is the absolute favorite to win the world championship another time. This statement impacts the odds, which go very low.

If you are thinking of a better valuable bet, Be a Better Bettor recommends you three possibilities. The first pick is on the current championship runner-up Andrea Dovizioso (+450). The second one goes to Jorge Lorenzo, who is Marquez’ teammate and rides the same machine (+700). The last suggestion goes to the legendary veteran Valentino Rossi (+1100), who just turned fourty.

What are the different MotoGp Bets?

The World Championship and the Constructors Championship are two of the most popular MotoGP bets. These bets are usually placed before the season starts, although you can make these wagers at any stage of the campaign and are futures bets that last the entire season.

Betting on the World Championship is easy. Pick the rider that you think will walk away with the title, find a sports betting site from our list of exclusive partners, and make your bet. You will not see any return on your bet until the full season is completed and the MotoGP champion is crowned.

Valentino Rossi holds the record for most title wins with seven, although he has not won a title since 2009. The man of the moment is Honda’s Spaniard Marc Marquez who won the 2013, 2014, 2016, 2017 and 2018 titles, became the youngest-ever MotoGP title winner and only the second man in history to win the title in his debut season.

Since 1983 and through to 2017, Honda have won the Constructors Championship 23 times, Yamaha 12 times and Ducati once.

Betting on individual races is also popular, not least because you place your bet and an hour or so later the result is determined.

Most sports betting sites offer several betting markets for individual races, one of the more popular being the overall race winner. Some riders excel on some circuits while others seem to falter at them. This is because of their different racing styles, but also because some teams set themselves up for raw power on the straights with others preferring to make time up in the curves and corners.

Another bet you can often make when it comes to the individual races is whether or not a rider will finish on the podium, which is the first three finishing positions. This market will offer shorter odds because you win your bet if you rider finishes first, second, or third, but it is a good way to lower your variance and exposure on a race.

Perhaps two of the most popular MotoGP bets in an individual race is who will finish on pole position and who will record the fastest lap.

The fastest lap is often set by a rider who has qualified further back on the grid as they have to put in an extra special performance in order to close the gap on the rider who started first om the grid. Of course, this is not set in stone because sometimes the leader of the race sets the fastest lap, but it is worth bearing in mind.

MotoGP is one of the most exciting forms of motorsports in the world today and it can gain even more excitement if you have placed a bet on the outcome of a race of the championships.

The key to betting on MotoGP, bet it individual races, or the futures markets – indeed with any sports betting activity – is to do your research.

There is so much information available to bettors today that there is no excuse for not researching a betting market properly. Learn which riders are in form and which seem to be struggling. Look into the circuits that riders excel in, investigate if any of the riders were involved in an accident and could be carrying an injury, anything that gives you an edge over the bookmaker.

Then and only then should you sign up to one of our sports betting partner, grab yourself a welcome bonus and bet on MotoGP.

MotoGP has been around since 1949 and is the oldest established motorsport world championship. The motorcycles are the most powerful in the world and all 18 circuits put the riders to the ultimate test.

The Grand Prix motorcycles used in MotoGP are purpose-built racing machines that are not available to the general public due to their sheer power and manoeuvrability, which adds to the spectacle.

There are plenty of opportunity to bet on the MotoGP, so if you want to know how to bet on MotoGP you have come to the right place. Keep reading to check out our in-depth guide.

Every generation seems to have at least one stand-out rider who the public adore, usually because they win title after title.

In the 1980s we had Eddie Lawson and his Yamaha domination followed by Wayne Rainey and Mick Doohan, on a Yamaha and Honda respectively, in the 1990s.

Perhaps the most famous rider of them all is Valentino Rossi who was the rider to beat in the 2000s, winning seven world championships between 2001-2009, but now the crown seems to have been handed over to Marc Marquez and his Honda as he has won the world title in four of the past five seasons.

Knowing how to bet on MotoGP, who to bet on and which team to wager on is vitally important to making money from betting on this sport. Thankfully, for you, we have everything you need to bet on MotoGp.