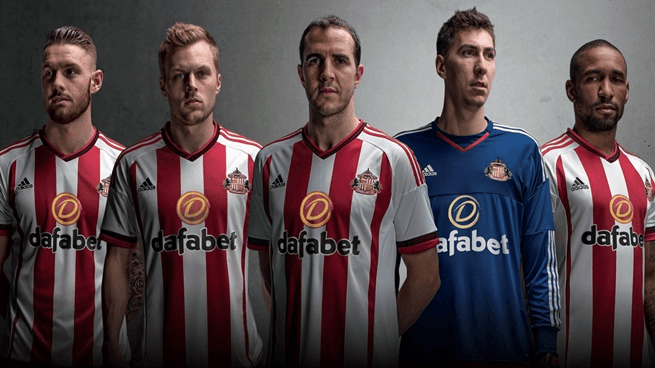 How To Bet On Sunderland

In 2015/16 Sunderland survived a bitter relegation battle against their neighbors, Newcastle United. The Toon fell down the trap door into the Championship, while the Mackems survived. But it was a reversal of fortunes in 2016-17, as the neighboring teams traded places, with Sunderland being relegated in the Championship. It's a bitter pill to swallow for Sunderland supporters, who didn't see their club put the kind of fight required to stay in the top flight of English football.  [+]

The team consistently starts seasons poorly. Survival looked like a pipe dream in 2016-17, which is indeed what it turned out to be. Their pipe dream turned into a nightmare as the club languised at the bottom of the table for the duration of the season.  Too many times Sunderland tempted their relegation fate, escaping from trouble in the dying stages of previous seasons. It wasn't to be in 2016-17, as Sunderland must now prepare for Championship soccer.

Find out who Sunderland play next and make sure to reference frequently the current betting lines on offer. Find the best returns possible before planning your final wagers.

Sunderland have a tough grind ahead as they prepare for the Championship season. Find out where the weaknesses lie in their schedule and bet accordingly.

Sunderland are expected to at least make the Championship playoffs come season's end. Find out how they're faring in the current season.

How To Win Sunderland Bets

Sunderland were destined for the drop from the onset of the 2016-17 season. Manager David Moyes publicly stated in the early stages for Sunderland to expect a relegation dogfight. Not exactly the most inspiring or positive comments from a coach. He It definitely became a self-fulfilling prophecy, as Sunderland struggled mightily throughout the season.

You can't pinpoint one reason for Sunderland's demise, as there were multiple reasons they northeast side made the drop, including their woeful home record. They managed to win three games in Sunderland all season, gaining a league's worst 14 home points along the way. Only Hull City, another relegated side, allowed more home goals than Sunderland. They also have the dubious record of the worst home offensive record, as they bagged a meager 16 goals.

Sunderland were marginally better on their travels, but the improvement wasn't enough to pull them from the bottom. With the fourth worst away record in the top flight, Sunderland gained 10 points from three wins. The Black Cats scored two fewer goals on the road than they did at home, showing just how poor they were in front of their loyal supporters.

Will Sunderland gain promotion into the Premier League again soon? I don't think so. Things look bad in Sunderland. Really bad. Moyes is inherently negative and the Scot has also made some baffling signings recently. His players aren't strong enough to cope with the physicality of the Championship, nor do they have the pedigree to challenge for the title.

They'll be lucky if they qualify for the playoffs, but rest assured, this Sunderland team is facing an extended stint in England's second division.