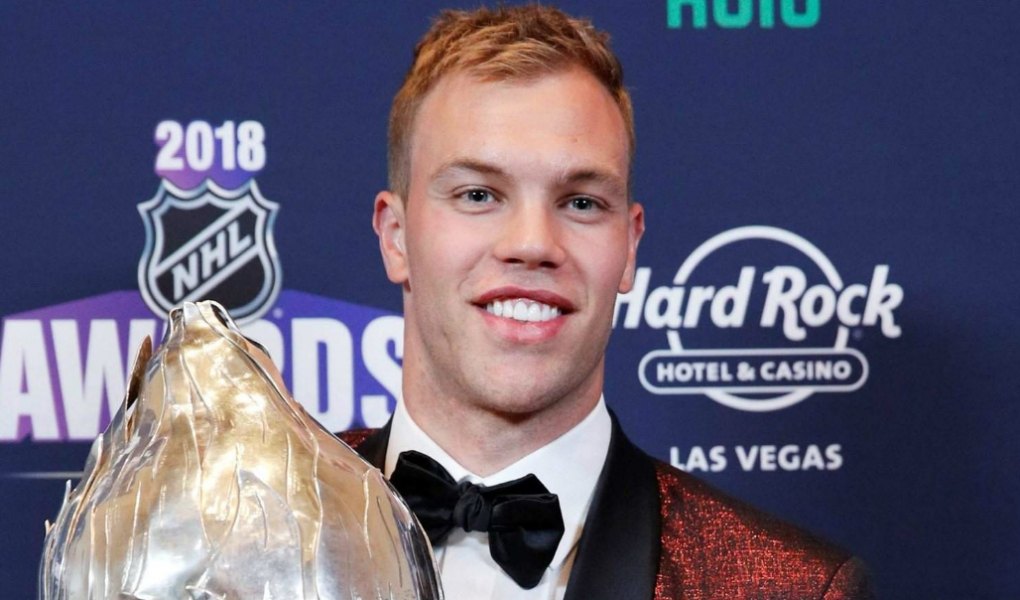 Alexander Ovechkin of the Washington Capitals was the last player to repeat as NHL MVP (2007-08 and 2008-09), which means Hall will have to have another career year to claim this honor in 2018-19.

Three-time Stanley Cup champion Sidney Crosby (+700) of the Pittsburgh Penguins is the second choice, while two Toronto Maple Leafs are the next top picks (+1000).

John Tavares, who left the New York Islanders as a free agent, signed a seven-year, $77-million deal with the Leafs. He’s joined by rising star Auston Matthews, who was the first overall pick by Toronto in the 2016 draft.

Ovechkin (+1200) rounds out the Top 5, with Mark Scheifele of the Winnipeg Jets, Nikita Kucherov of the Tampa Bay Lightning and Nathan MacKinnon of the Colorado Avalanche all listed at +1500.

Who’s going to win the 2018-19 Hart Trophy as the NHL’s most valuable players? The countdown starts with the fifth pick through to our top selection (Bovada odds listed with player’s name):

Ovechkin may not have won the league’s MVP award last season, but he won two trophies that were far more important to him.

Ovechkin, who captured the Conn Smythe Trophy as the most valuable player in the playoffs, finally reached the mountaintop as the Capitals hoisted the Stanley Cup for the first time in the franchise’s 43-year history.

Ovie, who finished ninth in league MVP voting last season, has scored 50-plus goals in seven of his 12 NHL seasons. He fell one goal shy of that mark last year.

The first overall pick from the 2004 draft is still a great player, but there are better choices to bet on for league MVP.

The return of Tavares to his hometown has many talking Stanley Cup, something the Leafs haven’t won in 50 years.

The superstar joins a stacked Leafs’ lineup which includes young stars Auston Matthews and Mitch Marner. That can only mean more points for Tavares and more wins for the Leafs, who have only made it to the playoffs three times in the last 13 seasons.

Tavares has scored 24 or more goals in all nine seasons with the New York Islanders. He was just two points off his career year last season in which he scored 37 goals and added 47 assists for 84 points.

If the Leafs can live up to all the hype, Tavares will be a strong contender for MVP.

There’s not much left to win for the Penguins’ captain. Three Stanley Cups, two league MVPs … and counting.

Crosby earned 100 or more points in four of his first five seasons. He’s reached that plateau only once in his last eight. He’s also scored 30-plus goals eight times.

The Penguins’ top line center, who was their first overall pick in the 2005 draft, now has a tough time reaching 90 points a season, which he hasn’t done since 2013-14.

He’s still a superstar based on his illustrious 13-year career, but the Nova Scotia native is not the league MVP anymore.

The Oilers have had many top draft picks over the years since they have made the playoffs just once in 12 seasons. In all those selections, their best pick was Connor McDavid.

No. 97 has delivered more points than his jersey number in his last two seasons (100, 108). The first overall pick in the 2015 draft continues to get better every year as he enters his fourth season in Edmonton. He had a career-high 41 goals after scoring 30 the year before.

The Oilers had a sub-.500 season last year and finished sixth in the Pacific Division. They need to improve to lift McDavid’s chances as league MVP.

The Avalanche improved by 47 points last season, and they can thank MacKinnon for a lot of that success.

Another first overall draft pick (2013), MacKinnon had an incredible season last year with career highs in goals (39) and assists (58) as the Avalanche reached the playoffs for the first time in four years.

He had nine multi-goal games (tied for first in NHL) and only one game without a shot on goal. MacKinnon finished fifth in the NHL in points and second in points per game.

The Avalanche star is a risky bet, but he finished second in voting last season with 60 first-place votes and he continues to improve with every season. He’s 23 years old and ready for prime time.