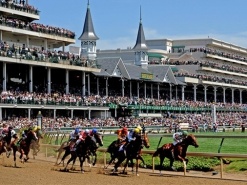 Since the end of their juvenile season, the best horses in the country have been competing in graded stakes races with one goal in mind – the Kentucky Derby. The action began to heat up this spring as the stakes races got more important and the points on the line were even higher.

While the field for the 2017 Kentucky Derby has not been officially set, the contenders are all but confirmed and many of the horses who top the points leaderboard will be in the big race. This year has shown a particularly wide open and contentious crop of three-year-olds but there are several horses with strong winning records who stand above the rest.

That covers the contenders who have won the major prep races and top the points leaderboard. The 2017 Kentucky Derby has shaped up to be one of the most intriguing and exciting in recent years largely because there is no truly dominant standout. A case can be made for any one of these top contenders to win as well as for a longshot to step up and steal the spotlight.

History will be made on Saturday, May 6 at Churchill Downs and one of these horses will have the most sought-after win of all in their past performances – a win in the Kentucky Derby.