Want to make your picks for the Melbourne Cup 2020? This is an $8 million Thoroughbred horse race that takes place just days before the Breeders’ Cup World Championships at Keeneland in Kentucky. These two major horse racing events take place almost simultaneously, leading to great betting all around the world!

Wondering how to bet the 2020 Melbourne Cup online? The most prepared bettors pick a racebook where they can bet the race. Many of these have the money back specials, contests, or other guarantees to make sure your profit is stretched further and to get the most out of your money. We have reviewed several sportsbooks that will suit your needs. Select your favorite, and then start betting the Melbourne Cup with our free picks!

Win betting isn’t the only kind available for the Melbourne Cup. Make sure you play other Melbourne Cup wagers, such as exacta, trifecta, quinella, and superfecta wagering, to maximize your value. Last year, the winner Vow and Declare (who is back to defend his crown in 2020!) topped a $2,953.40 trifecta!

The field of 24 horses in the Melbourne Cup includes some of the best horses in the entire world. The group is led by the New Zealand mare Verry Elleegant, who is a multiple Group 1 winner this year, as well as defending champion Vow and Declare. 2019 Epsom Derby (G1) hero Anthony Van Dyck is entered along with stablemate Tiger Moth, and Russian Camelot could make some noise at a big price.

Verry Elleegant won the Group 1 Caulfield Cup over Anthony Van Dyck last out and has won in three of four starts this season already. She is nine for 21 overall in her career with Group 1 wins from seven furlongs all the way up to a mile and a half but has never run this 2-mile distance before. Chris Waller trains the popular mare, who will be the fan-favorite among many.

Defending champion Vow and Declare, who defeated fellow 2020 runner Prince of Arran by a head in 2019, has yet to win since then. He has not finished better than third since March, but that was in a Group 1 race over this Flemington racetrack.

Sir Dragonet is Irish bred and raced there until he arrived in Australia over the summer. He ran second in Ireland’s Group 1 Tattersalls Gold Cup, then promptly shipped overseas to score in the prestigious, Group 1 Cox Plate here on October 24. He will be returning off short rest, but that is a tradition for this race and should not be a deterrent when wagering. Glen Boss will ride. 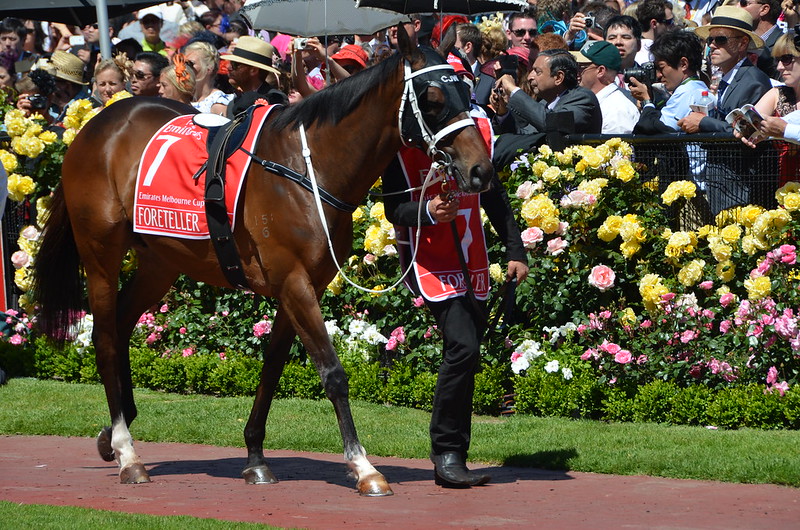 Anthony Van Dyck has been one of superstar trainer Aidan O’Brien’s best horses since he was a juvenile. He won the Epsom Derby (G1) at three and most recently was beaten just a head by Verry Elleegant last out in the Caulfield Cup with severe traffic trouble in the lane. He was probably the best horse on that occasion, missing just at the wire, and should have the stamina to get this distance based on pedigree.

Tiger Moth is a classy sort who is going favored in many pools. A Group 3 winner at Leopardstown in Ireland last out, he is part of the O’Brien team that shipped in from Ireland. This will be just his fifth-lifetime start for the son of Galileo.

Russian Camelot was third in the Cox Plate for trainer Danny O’Brien and is lightly raced with just six starts. He has been in the top three in five of those efforts and won a Group 1 at Caulfield in September.

Mustajeer is an older horse who has not won in a long time, but has done well at these marathon distances and will receive one of the top weights in the race.

Anthony Van Dyck is the best horse in this race. He should have won the Caulfield Cup, and has been a star in all three seasons on the track. International shippers have become ever more dangerous in this race in the last few years, and he is no exception. If he has a clean race, he should win, with lower-priced horses such as Verry Elleegant and Sir Dragonet behind him.

The field for the Melbourne Cup 2020 with their jockeys: