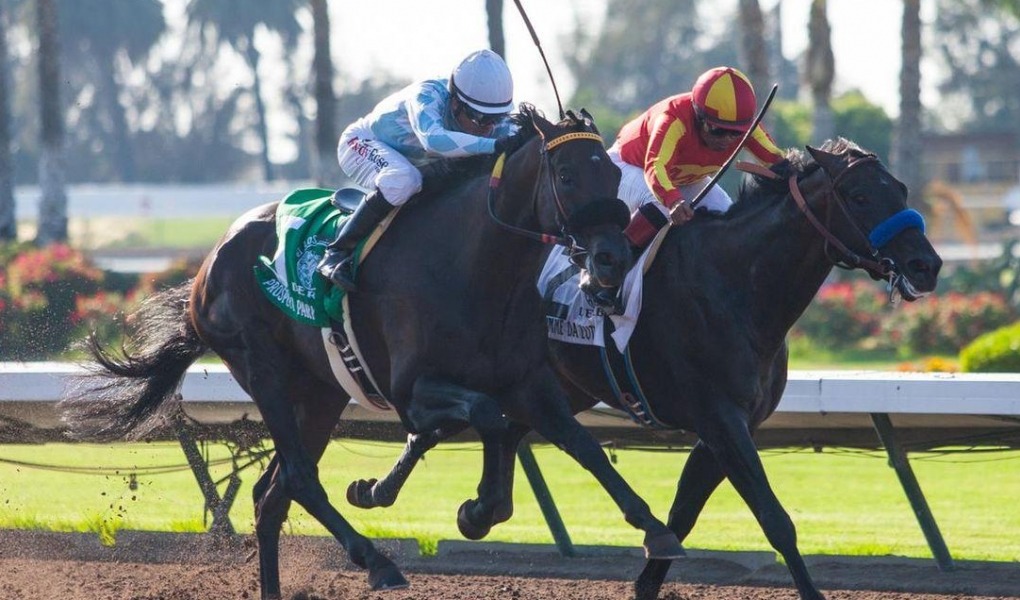 Bet On The Los Alamitos Futurity 2018

As the second-to-last Derby qualifier for 2018, the Los Alamitos offers qualifying points to the top four finishers on a 10-4-2-1 scale. Futre bets on the 2019 Derby are now available in Bovada’s online racebook.

Baffert’s two entries will break from opposite ends of the gate and go into the race as the 1-2 choices in the morning line odds.

Breaking from post position #1 and the ML favorite at 6-5 is Improbable, who has two wins in two lifetime starts, with both of those efforts producing eye-catching speed figures.

After breaking his maiden getting up to win by a neck at six furlongs at Santa Anita, he took a huge step forward next out to come from just off the pace to blow away the field by more than seven lengths racing one mile in the Street Sense Stakes at Churchill Downs.

Another move forward off that race makes him a dangerous favorite on Saturday.

From the outside gate comes the second Baffert entry of Mucho Gusto, checking in at morning line odds of 3-1. He’s also undeafeted in two starts to begin his career, the first of those wins on the dirt at Los Alamitos.

He then moved up to graded-stakes competition to score a wire-to-wire win in the (G3) Bob Hope Stakes at Del Mar at a distance of seven furlongs. Expect Mucho Gusto to come flying from the gate and set the pace once again.

While they employ different running styles, there’s little to chose between Improbable and Mucho Gusto and a Bob Baffert exacta in the Los A Futurity is not out of the question.

Second behind Mucho Gusto in the Bob Hope was Savagery, and he’s in here as well and adds some value to the trifecta at ML odds of 8-1.

After chasing the winner right out of the gate, it looked like he was going to be passed for the runner-up spot but fought back to grab the Place money by a head.

If that effort didn’t take too much out of him, he’s a good bet for a minor award once again.

Third choice in the ML odds at 7-2 comes Extra Hope, who was also in the Bob Hope field where he ran fourth, also at post-time odds of 7-2.

It took him four tries to get his maiden win, and that still represents the only win on his resume, but that was a solid 8 3/4 length score at the Los A Futurity distance of 1 1/16 miles, and a repeat of that race gives him a good chance to get into the money.

The Los Alamitos Futurity goes Saturday, December 8 from Los Alamitos Race Course. It’s race #5 of 9 on the day and the first of two graded-stakes races. Post time is set for 2:28 PM Pacific.

The Los A Futurity and the Remsen Stakes next weekend in New York close out the 2018 qualifying season for the Kentucky Derby, but things pick up again right away in January and you can bet all the race right up to Derby day with an account in one of these online racebooks.