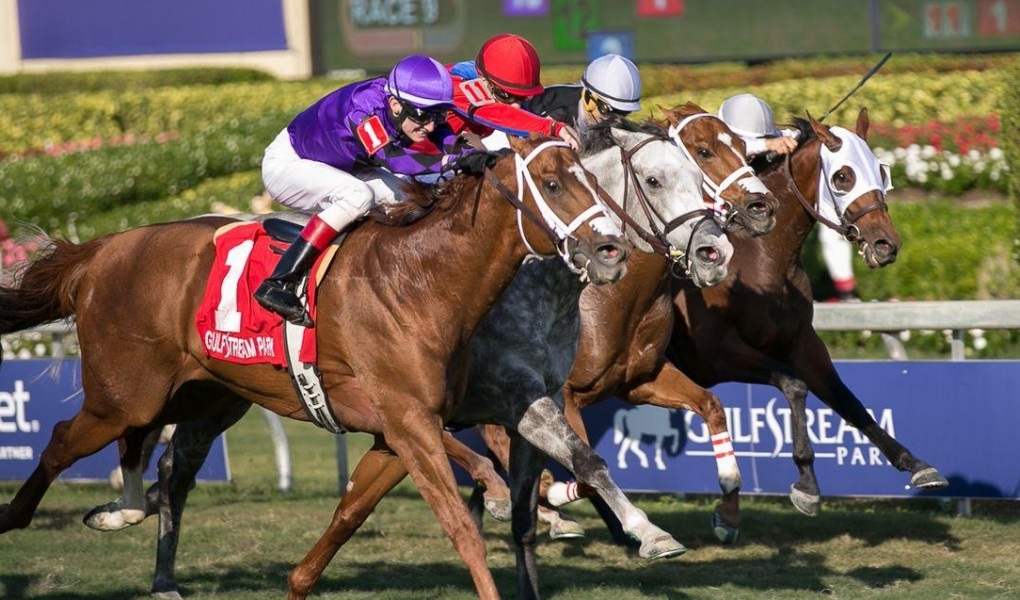 Bet On The Fort Lauderdale Stakes 2018

Like every race at Gulfstream, the Fort Lauderdale can be bet online on a PC or mobile device with an account at Bovada or another top-ranked racebook. For handicappers looking at big races down the road, the Fort Lauderdale is a key prep race for the $7 million Pegasus World Cup Turf Invitational in late January.

Among the big names going to the gate for the Fort Lauderdale, Qurbaan checks in at morning line odds of 5-1. A multiple-stakes winner in France, he was also a winner in his North American debut at Saratoga Race Course in September, winning the (G2) Bernard Barusch Handicap by a nose at odds of 13-1.

Last out he tried Grade 1 company in the Shadwell Turf Mile at Keeneland, coming from way back to get up for third.

The track on that day at Saratoga was probably a bit softer than he likes, and with firmer footing and more distance on Saturday, he’s likely to be right in the mix as they race to the wire.

Glorious Empire Wants A Bounce Back

Coming from the inside gate, Glorious Empire (12-1 in the ML odds) was riding a three-race win streak before a disappointing 13th place finish in the 2018 Breeders’ Cup Turf.

Prior to that, he had won the (G1) Sword Dancer Stakes and the (G2) Bowling Green Stakes, both at Saratoga, his second and third wins in four starts for 2018 to that point.

Like Qurbaan, Glorious Empire probably caught a much softer turf course than he likes in the Breeders’ Cup, so firmer going Saturday and a cut back in distance gives him a good shot at the prize money.

Coming down to Florida from his home base in Woodbine, Mr. Havercamp (15-1 ML odds) has a pair of recent Grade 2 wins in Canada, and demonstrated that he can run with the best US horses as well when finishing second to multiple Grade 1 winner Oscar Performance in the (G1) Woodbine Mile back in mid-September.

He has since come back to win the (G2) Autumn Stakes on Woodbine’s all-weather track.

Oscar Nominated Has Been Racing The Best

Just to Mr. Havercamp’s inside in the starting gate, Oscar Nominated (15-1 in the ML) has more graded-stakes experience than any other horse in the race, as the Fort Lauderdale will be his 16th consecutive start in top-level races.

He has a pair of wins and eight in-the-money finishes in that span, and although he has been off form in his most recent starts, he has shown enough talent in his 29-race career that he should be good for a minor reward in this field.

The 2018 Fort Lauderdale Stakes goes Saturday, December 15 from Gulfstream Park in Hallendale, Florida. It’s the 11th and last race of the day at Gulfstream, with an expected post time of 5:06 PM Eastern.

Sharpen your handicapping skills prior to the $9 million Pegasus World Cup at Gulfstream by betting south Florida racing from home with one of these online racebooks.