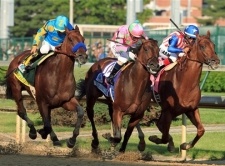 One of the most fun aspects of major horse races like the Kentucky Derby is that handicappers are given the chance to wager at odds that are often likely to be much higher than they will be on race day, thanks to future bets. As the name implies, weeks away from the big event, top racebooks like Sports Betting are now listing odds to win on dozens of the contenders for the Derby. [+]

With several qualifying races still to go, today's longshot could be the Derby Day favorite, and making a 2017 Kentucky Derby prediction on one of those runners and locking in your bet is a chance to hit payout far bigger than you'll be getting through the track odds on the day of the race.

Unlike the past few years, when horses such as Nyquist, American Pharoah and California Chrome went into the Derby as solid favorites, there is no clear-cut leader of the 2017 three-year-old class of thoroughbreds, and so the chance of a horse at high odds winning the race is a definite possibility. Once you've settled on your choice, you can make your bet with one of these highly recommeneded online racebooks.

As noted above, even just a few weeks before the Kentucky Derby there is no clear-cut favorite in the field and therefore lots of opportunity to find a lucrative longshot in the future bets, like those offered by online racebooks such as SportsBetting.ag.

At the same time, there are still some major prep races to be run, which needs be taken into consideration when deciding which horses will be moving up or down in the track odds.

Looking at a few of the top choices in the Kentucky Derby qualifying points list and comparing that to the future odds on offer on those runners at Sports Betting gives a couple examples of what handicappers need to consider in this regard.

A Look at an Early Contender....

As of late March, the lowest odds being offered on any of the top 10 horses on the Kentucky Derby leaderboard by Sports Book is +650 (meaning a $100 bet would return $650) or just over 8-1, on Classic Empire.

The winner of the 2016 Breeders' Cup Juvenile, Classic Empire was considered the top contender at the start of the year for the Derby, and this is reflected in the odds.

However, he has not been having the three-year-old campaign most expected. He ran adequately in his three-year-old debut to finish third in the Holy Bull Stakes, but has since missed training with an injury. At this point, there are a couple different scenarios that could play out for him.

He may run a spectacular race in his next start, win easy, and will once again be considered a strong Derby favorite.

If this happens you could expect his odds to be much lower than 8-1 on Derby Day, in which case a future bet at this point makes sense. However, another possibility is that he runs well enough in his next start to pick up enough points to make the Derby starting gate, but doesn't actually win the race. In that case, his odds on Derby Day could be substantially higher, likely more than 8-1. The third possibility is that he doesn't make the Derby at all.

Given the unknown factors and the relatively low future bet odds, it's tough to make a case for taking a chance on Classic Empire right now.

....Versus a Late Bloomer

Looking elsewhere we find a horse like Girvin, currently fifth on the Derby leaderboard, and on offer at odds of +2000, or 20-1.

Having raced just once in 2016, and based at Fair Grounds in New Orleans, he's a horse that was under the radar at the beginning of the year, and started his three-year-old season by running second in an ungraded stakes race at that track.

However, he made a big move forward in his second start, and beat a fairly good field to win the (G2) Risen Star Stakes by two lengths. He's likely to make his final prep in the (G1) Louisiana Derby and a win there will mark him as a serious contender for the Run for the Roses, at odds much, much lower than 20-1.

All things considered, it's clear that a future bet right now on a horse like Girvin rather than Classic Empire is the better way to go.

Of course, there are no guarantees in horse racing, and things could change drastically through the last month of the Derby prep season. However, the basic strategy with future bets is to evaluate which horses look to be improving (versus those that appear to be on the decline) and how that might alter their track odds come race day. Make an educated decision based on the difference to what is being offered in online racebooks today.

March has its madness and April is all about the dawning of the baseball season, but May is reserved for the Run for the Roses, the Kentucky Derby. Contested on the first Saturday in May, the one and a quarter mile race at Churchill Downs has been held every year since 1875 and is the first leg of thoroughbred horse racing's Triple Crown. A record 170,513 attended the Derby in 2015.
Read this article
Betting Picks - 25/01/19
Smarty Jones Stakes 2019

The winter thoroughbred horse racing meet at Oaklawn Park in Hot Springs, Arkansas kicks off this weekend, and Friday's nine-race card features the $150,000 Smarty Jones Stakes. Open to three-year-old horses racing one mile on the Oaklawn dirt track, the race has drawn a solid field of nine entries. On paper the race offers excellent betting value with no overwhelming favorite going to the gate.
Read this article
Betting Picks - 04/01/19
Bet On The Sham Stakes 2019

After a stop in New York City for the Jerome Stakes on New Year's Day, the road to 2019 Kentucky Derby qualification runs through southern California on Saturday. Seven three-year-old colts are expected to go to the gate at Santa Anita Race Track for the (G3) Sham Stakes. They'll be racing one mile on the Santa Anita dirt course, chasing a total purse of $100,000 and 2019 Derby qualifying points.
Read this article
Betting Picks - 30/11/18
Bet On The 2018 Remsen Stakes

The race to qualify for the 2019 Kentucky Derby picks up steam again this weekend with the running of the $250,000 (G2) Remsen Stakes at Aqueduct, which will award Derby qualifying points to the top four finishers in a 10-4-2-1 scale. In an interesting handicapping angle, several of the colts in the field will be making a switch from turf-to-dirt racing surface.
Read this article